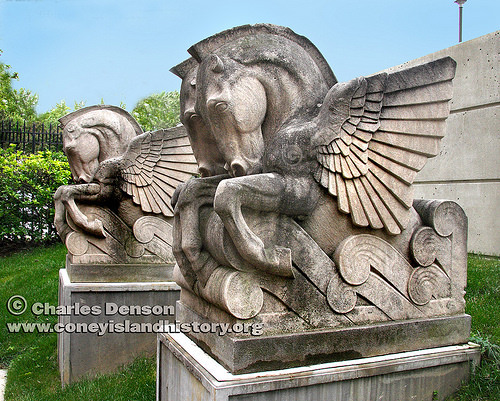 Coney Island’s history has been shaped by fire. Nearly every block of the amusement zone burned to the ground or was destroyed by fire during the first century of development. Many of the fires spread into massive conflagrations due to low water pressure in the community’s fire hydrants, a defect that allowed fires to spread unchecked. After the disastrous 1932 fire that destroyed four square blocks of amusements and residential buildings, the city finally built a new pumping station to serve the needs of the fire department.

The beautiful new pumping station designed by famed architect Irwin Chanin opened in 1938 on Coney Island Creek. The Art Deco structure was unusual for Coney Island and much different than most municipal structures which were commonly utilitarian and devoid of ornamentation. Chanin commissioned a pair of winged horse sculptures for the entrance to the elliptical limestone and granite Moderne structure, creating a magnificent monument amidst Coney’s ephemeral landscape.

Decades later the building was decommissioned and sealed up, leaving it vulnerable to vandalism. The sculptures were saved and relocated to the Brooklyn Museum, where they are stabled next to the rear entrance. Nowadays, the Pumping Station survives in a state of arrested decay, surrounded by a community garden. The rear of the property bordering Coney Island Creek, is used as a popular fishing spot.

Numerous proposals have surfaced recently to repurpose the building for community usage including as a Coney Island ferry terminal, ecology center, or museum. The structure was proposed for a landmark designation in 1980 and languished since then until it was included in a “mass de-calendering” proposed last year by the Landmarks Preservation Commission. Now its future is in doubt. 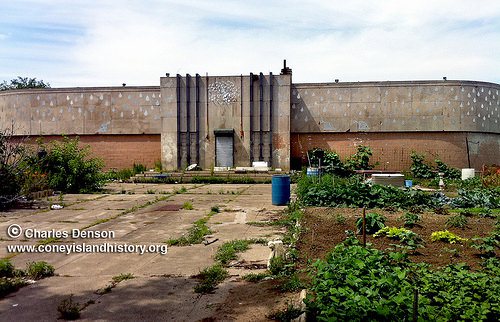 On October 8 there will be a public hearing to decide the future landmark status of this important building. Coney Island has lost many historic structures during the last few years so it is imperative that this important community asset be saved for future generations. – Charles Denson

For more information about the public hearing or to submit written comments to save the Pumping Station, visit the Landmarks Preservation Commission site at:

I think the pumping station should be saved and used possibly as an addition to Mark Twain school. Otherwise it could be used as a ferry slip or a kayak/gondola base. But, by all means it should be saved.

I think the pumping station should be saved and used possibly as an addition to Mark Twain school. Otherwise it could be used as a ferry slip or a kayak/gondola base. But, by all means it should be saved.

RT @CIpolarbearclub: Are you ready for the best party of 2023? Our registration is OPEN! https://t.co/XPE3vuDvbs - make sure you fill out…
2 days 17 hours ago

Casino Fever: The Last Time Around, an excerpt from Charles Denson's 2002 book, Coney Island: Lost and Found: "In 1… https://t.co/jykQygopaT
3 days 8 hours ago