A Roundup of 2021 Oral Histories in our Archive 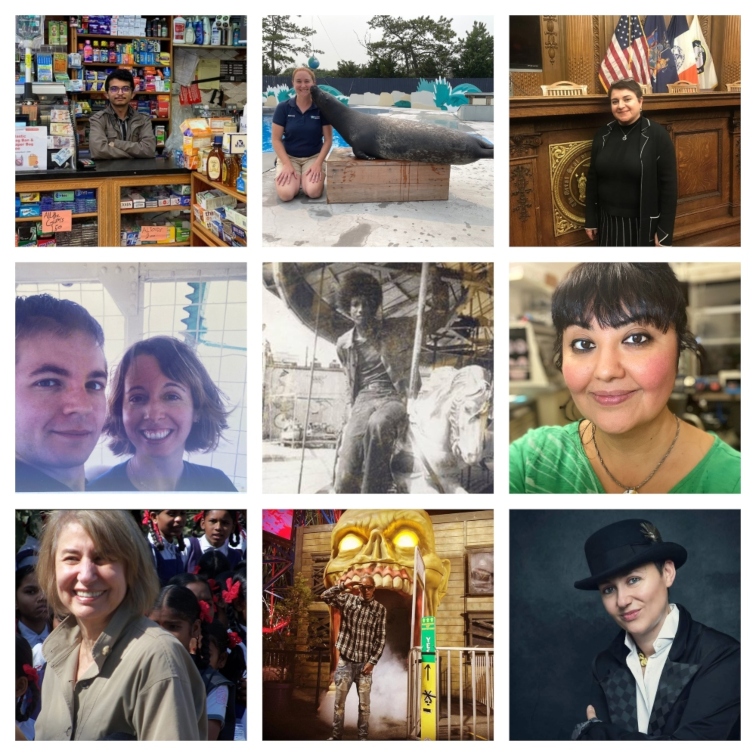 More than 400 oral histories are available for listening in the Coney Island History Project’s online archive. Please listen, share, and if you or someone you know would like to record a story remotely via phone or Zoom, sign up here. We record interviews in English, Russian, Chinese, and other languages with people who have lived or worked in Coney Island and adjacent neighborhoods or have a special connection to these places. Among the 2021 additions to our archive are the following interviews recorded by Mary Conlon, Charles Denson, Julia Kanin, Shavon Meyers, and Tricia Vita.

Nasim Almuntaser is a 2021 Brooklyn College graduate who grew up working in his Yemeni-American family's bodega in Brighton Beach. The history and education major plans to become a history teacher. He describes the special relationship and sense of community that a bodega owner has with store patrons and shares his experiences during the pandemic and the Bodega Strike of 2017.

Tara Altebrando shares memories of getting engaged on the Wonder Wheel in 2004. She talks about how iconic places in Coney Island inspired and provided a backdrop for her 2011 novel Dreamland Social Club. During the pandemic, Tara and her husband Nick began adapting the novel into a stage musical with her 13-year old daughter singing the part of the main character.

Filmmaker Joyce Chopra grew up in Coney Island and Sea Gate in the 1930s and ‘40s. Her grandparents owned Kalina's Baths. Chopra describes how she got the acting bug at Lincoln High School while performing in a play with Lou Gossett Jr. She went on to direct groundbreaking documentaries and feature films including Joyce at 34 (1972) and Smooth Talk (1985, Grand Jury Prize, Sundance Film Festival).

Lolita Divilova lives in Coney Island, where she is active in the community as a member of Community Board 13 and the board of Brightwater Towers Condominium. A native of Baku, Azerbaijan and a former Moscow resident, Lolita and her family immigrated to New York in 1993, settling on Ocean Parkway, where many people from Baku then lived. They bought an apartment at Brightwater Towers in 2012.

Flatbush native Alan Fine shares memories of summers spent at Washington Baths Annex with his family as a boy in the 1950s. "I knew everybody," he says of the popular bathhouse, which was on the boardwalk next to the Childs Restaurant . It was there he first met his wife of 53 years, Helene, when they were children.  When the Annex was demolished in 1973, Alan went back looking for the slab of concrete on which he’d carved their initials in a heart.

Sea Gate resident Ellina Graypel is a singer-songwriter who grew up in Belarus. Performing and composing in both English and Russian, she also translates American songs into Russian, and Russian and Belarusian songs into English for American audiences. In 2021, Ellina was honored with the Women of Distinction Award by the New York State Assembly and Assembly Member Mathylde Frontus.

Raised in Bay Ridge, Natalie Johnson has memories of going to Ravenhall Baths in the 1950's and '60s until it closed after a 1963 fire. She recalls her family’s roomy walk-in locker, which was equipped with a mirror, seating, shelves and hooks where they left their swimsuits overnight. On the way home, they went on the rides at Steeplechase Park. "It was a wonderful way of life," she says.

Jen Kepler is an educator at New York Aquarium and a passionate observer of Brooklyn wildlife. The Brooklyn native recalls aspiring to work at the Aquarium ever since her childhood visits to see the beluga whales and the Aquatheater Show.  Jen says she found her calling "teaching people about what I love” and vividly describes species of ducks, gulls, and birds one can see on Coney Island Beach and at Steeplechase Pier.

David Louie tells what it was like to grow up and live in Coney Island in the 1950s through the '70s. His family owned Wah Mee, a popular Chinese restaurant on Mermaid Avenue. David's father emigrated from China in the 1920s and owned and operated several restaurants in New York. The family lost the Mermaid Avenue home and restaurant they owned during the city's urban ronslaught of the 1970s.

Zohra Saed is a poet, editor, and translator who was born in Afghanistan and immigrated to Brooklyn with her family as a child in the 1980s. She grew up in the Uzbek-Turkestani community on Ocean Avenue in Sheepshead Bay and roamed Neptune Avenue in Brighton Beach. Zohra reads two of her poems, "Brooklyn" and "Neptune Avenue," which vividly evoke scenes of her childhood.

Cuzzo Sosay is a musician and producer of gangster hip hop, soul music, inspirational music, and R & B who visited the Coney Island History Project this past summer. As a boy growing up in Brooklyn in the 1980s, his parents took him to Coney Island and he recalls the Hell Hole and Himalaya rides. He talks about Coney Island as musical inspiration, meditating on the beach and winter swimming.

Tony Williams and his family moved from Harlem to Coney Island when he was 13 and lived here from 1966 until the late '70s. He describes working at various rides in the amusement area as well as playing the harmonica on the Boardwalk for tips and with Bread and Puppet Theater. Tony reflects on the white flight that began in the late 1960s and the Coney Island of today.