"The Art of Reminiscing" at JASA Luna Park Senior Center 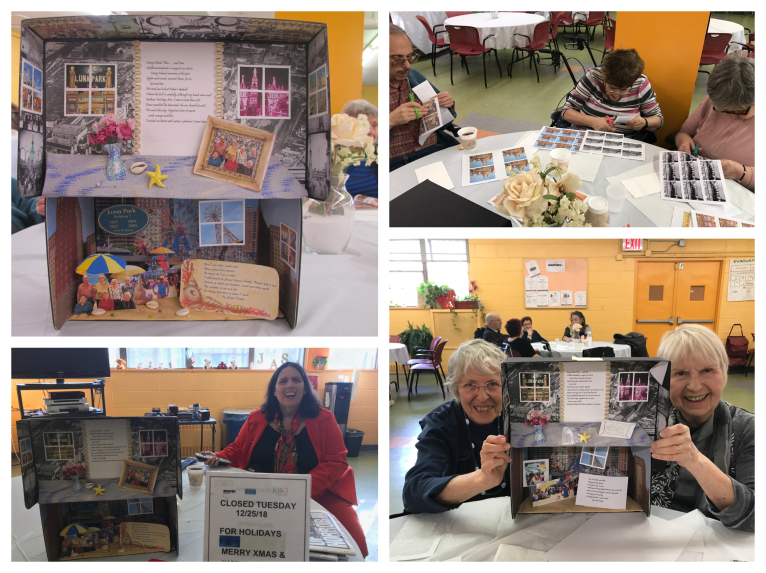 In 2019, the Coney Island History Project debuted “The Art of Reminiscing,” a reminiscence and art program for senior centers. It combines the telling of personal stories, sharing local history, and writing and collaging to make a communal “Reminiscence Box” as a culminating activity. Over the past several weeks, memoirist and reminiscence facilitator, Tricia Vita, who designed the program, and teaching artist Nancy Prusinowski enjoyed working with a group at JASA Luna Park Senior Center. We’re excited to share photos of the progress of the “Coney Island, Then…and Now Reminiscence Box,” which is now completed!  Many thanks to Council Member Mark Treyger, for supporting our community enrichment programming. Thank you to Adrienne Slomin,  Director of JASA Luna Park Senior Center, located down the block from the History Project, for inviting us to workshop the program.

In a series of sequential sessions, participants had the opportunity to arrange personal photos, historical images, text and objects to create a Reminiscence Box which portrays the story of their community "now and then" in a three dimensional and visual art form. The Luna Park-themed Reminiscence Box took its inspiration from “Coney Island, Then….and Now,” a poem written by Luna Park resident and senior center member Carole Karpel. Built on the former site of the original Luna Park (1903-1944), one of Coney Island’s famous amusement parks, Luna Park housing complex was named after the park and affords a panoramic view of the current amusement rides and attractions as well as the beach and the ocean. The top section of the box features the first part of the poem, the “then,” flanked by windows looking out on vintage scenes of Luna Park’s illuminated gate, spires and attractions.

The windows represent the time-traveling view of the JASA Luna Park seniors who created the box and their interest in the history of the site. Three of them are original tenants, having moved in with their families when the housing complex first opened in 1961. Their group photo is on the windowsill along with a vase of flowers and shells. The lower section of the box showcases the “now” part of the poem. It features the buildings of Luna Park Houses, the Wonder Wheel, and the beach, with the group gathered under a beach umbrella, plus the view of the Parachute Jump from an apartment window.  The outside of the box is decorated with vintage images of old favorites--Nathan’s, Faber’s Fascination, a carousel horse and other emblems of Coney Island affixed like antique luggage labels. The Reminiscence Box was donated to the JASA Luna Park Senior Center, where it will remain on display as a tangible record of the project.

The idea of creating Reminiscence Boxes as a reminiscence and art project was inspired by the European Reminiscence Network’s Making Memories Matter, a project which involved teams of reminiscence workers and artists working with individual elders in seven countries to create “Life Portraits” or “Memory Boxes” around their life experiences 60 years after the end of World War 2.