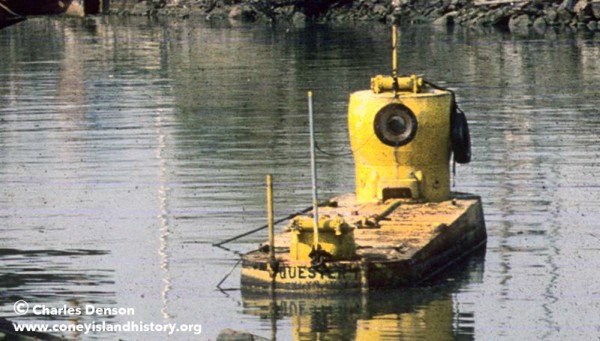 What can we learn about New York City and its waterfront from its boats? Stefan D-W of the Waterfront Alliance's Waterwire is inviting those across the maritime world and beyond-historians, planners, artists, business people, scientists- to share their perspectives on NYC History in 10 Boats. Below is the sixth installment, with Charles Denson, reprinted from Waterwire, with additional photos from the Coney Island History Project's Collection.

Ferry service to Coney Island began in the summer of 1845 when the steamboat Iolas left the Battery at 7am and arrived at the western tip of the island about an hour later. The little ferry made four trips a day to the dune-covered sand bar that would soon become “The Playground of the World.”

Coney Island’s little-known connection to the America’s Cup was centered at the island’s Atlantic Yacht Club at the mouth of Coney Island Creek where, in 1899, Sir Thomas Lipton’s Irish racing yacht Shamrock was berthed while competing in the world-famous event being held in New York Harbor. The Shamrock was defeated in all three races by the New York Yacht Club’s defender, Columbia. 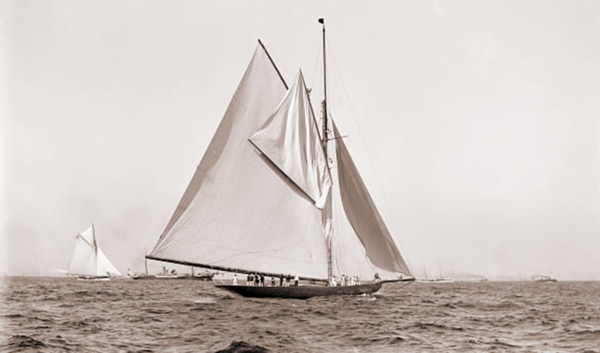 The wreck of the three-masted wooden schooner Saranac became a popular “ghost ship” attraction after it ran aground and was abandoned alongside the Steeplechase Pier in Coney Island around 1907. Steeplechase owner George C. Tilyou decided not to remove the wreck and instead decorated the ship’s masts and rigging with colorful flags, advertising it as a monument to the last days of proud sailing ships.

During the early days of Prohibition, Coney Island Creek was a main landing point for rumrunners. Many yachts built at the Wheeler Shipyard were modified into rumrunners that could outrun police boats and revenue cutters patrolling offshore. In September 1923, a 40-foot modified cruiser named Flying Dutchman partook in a dramatic, three-mile gun battle with police before beaching at Coney Island Creek. One of the Dutchman’s crew was shot by police, four others were arrested, and the boozy contents of the boat was taken to police headquarters at the Battery.

The whimsical vessel was actually a nautical-themed funhouse on the Boardwalk in front of Steeplechase Park during the 1920s and 1930s. After entering through the gaping mouth of a blue whale, visitors navigated a maze that led to encounters with captain “Noah” and his animal pairs while the entire attraction rocked back and forth. 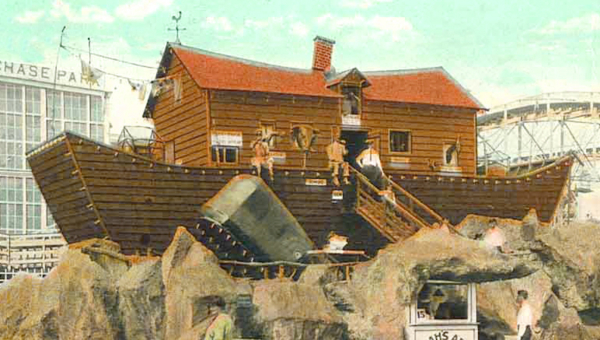 Ernest Hemingway’s famous 38-foot deep-sea fishing boat, the Pilar, was built on Coney Island Creek at the Wheeler Shipyard in 1934. Hemmingway’s fishing adventures on the Pilar became the inspiration for his novels The Old Man and the Sea, and Islands in the Stream. The boat is now on display at Finca Vigia, the Hemingway Museum in Havana, Cuba.

Gold Star Mother was a Staten Island ferryboat, one of three with feminine names launched in 1937. The name came from the “Gold Star” honor and flag awarded to mothers of soldiers killed in battle during World War I. The ferry, one of the first to be fueled with oil rather than coal, was in service for several decades before being retired and transformed into a floating methadone clinic. The vessel was towed to Coney Island Creek where it was eventually dismantled for scrap in 1975.

The Wheeler Shipyard on Coney Island Creek built and launched 230 patrol boats used by the U.S. Coast Guard during World War II. The 83-foot wooden craft served in all theaters of war, and many are still in use today as private fishing boats.

Quester I is a homemade submarine, built on Coney Island Creek in 1970 by Jerry Bianco, a Brooklyn Navy Yard welder. Bianco hoped to raise the Andrea Doria, an ocean liner that sank in the Atlantic in 1956. After taking the sub on several successful test runs in Gravesend Bay, Bianco was unable to raise the funds to continue his salvage project and the sub was abandoned. It broke loose of its moorings in a storm and now lies as a famous wreck at the mouth of Coney Island Creek.

Snowy Egret is a 45-foot marine skimmer that began operation in 1997 as part of a citywide floatables containment program. The vessel appears after heavy rainfall to skim up tons of Coney Island trash washed into the creek’s sewer outfalls during summer storms. 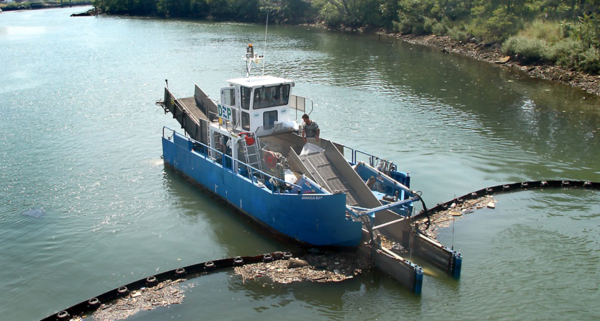 You neglected to mention one of the most famous military boats built by Wheeler in 1943, USS C-1994, later called the Granma. In 1956 it sailed from Mexico to Cuba with the members of the 26th of July Movement who ultimately overthrew the corrupt authoritarian Batista regime, only to be replaced by the communist authoritarian Castro regime.

RT @WSJphotos: Photographer Violette Franchi caught New York's Coney Island beachgoers on their own personal "runway" as they left for the…
8 hours 57 min ago