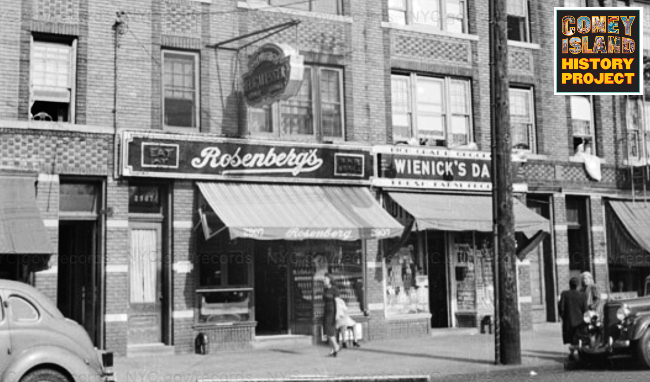 Among the recent additions to the Coney Island History Project's oral history archive is an interview with Rachel Rosenberg Simon, whose grandparents owned and operated Rosenberg's Kosher Deli Restaurant on Mermaid Avenue from 1917 to 1975.

“The store was everything!" says Simon, who grew up on West 29th Street in Coney Island around the corner from her family's business. Rosenberg’s was considered the finest deli on Mermaid Avenue as all the food in the restaurant including the mayonnaise was homemade. In her oral history, Simon describes the entire family including herself working at the restaurant, which was open fourteen hours a day, six days a week.

Simon recalls the downfall of Mermaid Avenue and Coney Island and the loss of the store due to urban renewal. In 1975, Rosenberg's went out of business when the tenants in the upstairs apartment set fire to the building. The interview was recorded by Charles Denson, who also grew up in Coney Island and remembers rescuing one of the Art Deco mirrors from Rosenberg's as the building was about to be torn down. "Those mirrors were gorgeous," says Simon. "The store was great. It was beautiful. We didn't take pictures. Who knew the store was ever gonna close, you know?"