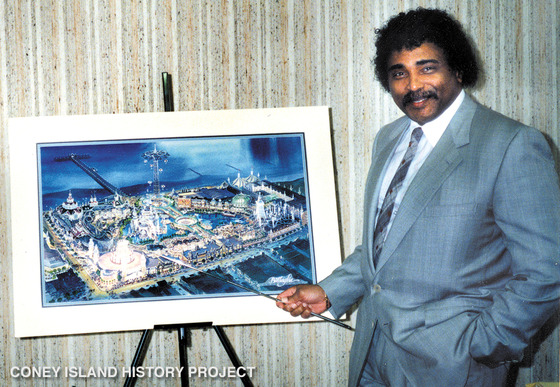 Horace Bullard passed away on April 9th after a long, painful bout with Lou Gehrig's disease. Although he was a controversial figure and I disagreed with him over the years, I believed that his 1980s plan for Coney Island was viable and heartfelt. Horace spent millions of dollars buying property and putting together plans for a major Coney Island amusement park. He remained confident that his plan would come to fruition until a recession and Mayor Rudolph Giuliani ended his dream.

I spent many hours interviewing Bullard for my book, "Coney Island: Lost and Found" and we stayed in touch over the last ten years. Unfortunately, he could not let go of his anger over the loss of his Coney Island lease and his belief that Mayor Giuliani's decision to cancel the lease was racially motivated. Horace became bitter after losing the Steeplechase site and he let his remaining properties, including the Shore Theater and Thunderbolt Roller Coaster, deteriorate. He never fully recovered after Giuliani illegally ordered the demolition of the old coaster in November 2000.

Last spring an interested party representing a popular sports figure contacted me about a plan to buy and restore the Shore Theater and asked me to be the go-between as they were having problems with the negotiations. I agreed to contact Bullard and it seemed that the sale might actually happen. Unfortunately, during this process there were loud calls in the media for the city to take the building using eminent domain. The timing could not have been worse. Bullard was riled and nothing more was said about the plan.

Bullard's grand amusement scheme was bold, audacious and fantastic. Back in the 80s he had investors lined up and the support of the public, the media, and elected officials . He had everything he needed except luck. His decade-long road show kept Coney in the public eye when many had written it off. Bullard's death brings a dramatic but sad chapter of Coney Island history to a close. As his daughter told me, "My dad had such a passion and dream for Coney Island. He was an extraordinary man in so many ways . . ."

I had the pleasure of meeting bullard..when I was an employee of the luxurious coop building called the whitehall.this residential building was in Riverdale NYC.he always treated the staff at this building..doormen and concierge and porters with the upmost dignity and respect..unlike the other residents whom were rude and demanding at times.we were all minorities whom were employed in this awesome residential building.him being Puerto Rican and wanting to restore and wmake Coney island grand again was inspiring.he was a great man during his life in the natural world.may he be at rest and with the lord.

RT @NEHgov: #OTD in 1920, the 19th Amendment was ratified, granting women the right to vote. The #NEHgrant-funded documentary THE VOTE chr…
23 hours 24 min ago

@jeffreylwilson Thanks again for sharing your Coney Island stories!
2 days 4 hours ago