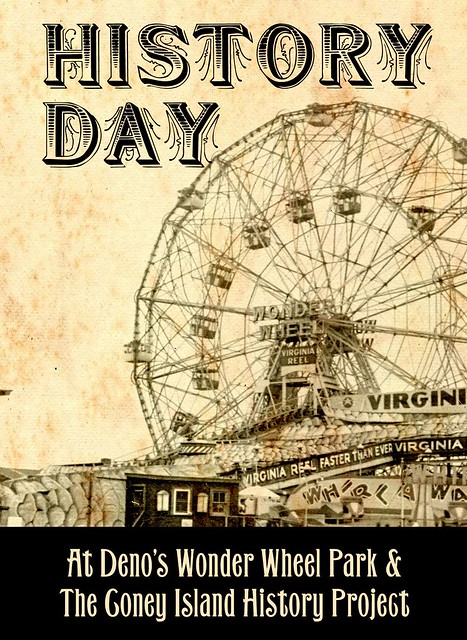 At 2:00 PM, Charles Denson, historian and director of the Coney Island History Project, will present the 2016 Coney Island Hall of Fame Induction Ceremony. The event will take place onstage at Dreamland Plaza, which is on West 12th Street at the Boardwalk as part of the History Day celebration.

Carol Hill Albert and Charles Denson at dedication of the Coney Island History Project Memory Booth on the Boardwalk, 2005.

A plaque honoring Carol Hill Albert and the late Jerry Albert, who founded the Coney Island History Project and the Coney Island Hall of Fame, which was originally along West 10th Street, will be dedicated on History Day.  The Alberts, who were owners of Astroland Park and longtime operators of the Cyclone Roller Coaster, founded the History Project in 2004 in memory of Astroland co-founder Dewey Albert. Ms. Albert will represent the Albert family.

The Hall of Fame honors architectural wonders as well as historical figures who were pioneers and visionaries whose creativity and ingenuity helped shape and define Coney Island.

This year’s Hall of Fame honorees in the architecture category are Coney Island’s landmark 1920 Wonder Wheel and the Riegelmann Boardwalk, which opened in 1923, and is currently under consideration for Scenic Landmark designation by the Landmarks Preservation Commission.

The Vourderis family, who have owned and operated the Wheel for more than three decades, will accept the plaque for the Wheel. Rob Burstein, President of the Coney-Boardwalk Alliance, will represent the Boardwalk.

Also being honored this year is Gargiulo's Restaurant, which opened in 1907, making it the oldest restaurant in Coney Island. The four Russo brothers, Nino, Ralph, Michael and Victor, bought the business from the Gargiulo family in 1965 and continued the fine Neapolitan tradition that made the establishment the classiest Coney Island destination for special events and fine meals. Gargiulo's is the last vestige of the many fine restaurants that were once sprinkled along the four blocks of Coney's "Little Italy" section. The Russo family will be represented by Nino Russo.

The Coney Island Hall of Fame will also pay tribute to a group of historical figures who were an important and creative part of Coney Island that has completely disappeared. We call them “The Wizards of 8th Street.”

“This small stretch of West 8th Street was the home to the Illions Carousel factory, the Mangels amusement factory, and Pinto Brothers amusement factory as well as the Bonomo candy factory. Supporting roles were played by an assortment of independent tinsmiths, wood carvers, sign painters and banner painters, blacksmiths, electricians, welders, carpenters, machine shops, restaurant supply stores, and a lumberyard. Behind the establishments was a railroad freight yard to deliver raw materials and warehouses to store them. West 8th is where visionaries invented, perfected and manufactured some of the world’s most famous amusements. It was also a training ground for amusement designers who apprenticed there and went on to build their own amusement companies.”

Joining the Coney Island Hall of Fame ceremony will be descendants of some of the prominent families who worked or lived on West 8th Street.

The Pinto Brothers, amusement ride manufacturers and one-time owners of the Cyclone Roller Coaster, are represented by the Kathryn Squitieri family.

The Kargman brothers Alex and Morris were talented old-world craftsman who could repair anything in Coney Island. They are represented by grandson Steve Kargman and granddaughter Calli Eve Kargman Bellitti.

Ride inventor and amusement manufacturer William F. Mangels emigrated from Germany in 1883 at age sixteen and by 1886 had a small machine shop in Coney Island where he made cast-iron targets for shooting galleries. A trio of rides manufactured by Mangels --the B&B Carousell and Deno’s Wonder Wheel Park’s Fire Engine and Pony Cart rides- are still in operation in Coney Island. He is represented by great-granddaughter Lisa Mangels-Schaefer.

Machinist John Rea left Italy and began working at Peluso Machine and Iron Works in 1947. The shop was responsible for creating replacement parts for countless rides in Coney Island. He bought the business, and operated it until 1966. His son, John Rea Jr., who was a Coney Island sign painter as a teenager and is now an advertising professional and adjunct professor at the School of Visual Arts, will represent the Rea family.

Sicilian immigrant Joe Bonsignore came to Coney Island in 1907 as a young man and wound up owning or being a partner in Coney’s largest businesses. He bought the L.A. Thompson Scenic railway and Stauch’s Baths. Joe also brought the Bobsled ride from the 1939-40 World’s Fair and moved it to Coney Island. His headquarters was on West 8th Street below the Thompson coaster. Joe’s son John raised his family in a home below the coaster and later bought and operated Silver’s Baths. Joe owned much of the property around West 8th Street but lost it to urban renewal in the 1950s. Charles Denson tells the Bonsignore family story in his book Wild Ride! A Coney Island Roller Coaster Family. The Bonsignore family will accept the plaque

The following activities are FREE throughout the day on History Day, from 1:00 PM – 6:00 PM:

A display of kiosks emblazoned with colorful banners of past Coney Island Hall of Fame honorees including George C. Tilyou, founder of Steeplechase Park; Dr. Martin Couney, inventor of the baby incubator; Marcus C. Illions, developer of the Coney Island style of carousel carving; and Lady Deborah Moody, who founded the town of Gravesend in 1645, becoming the first female landowner in the new world. 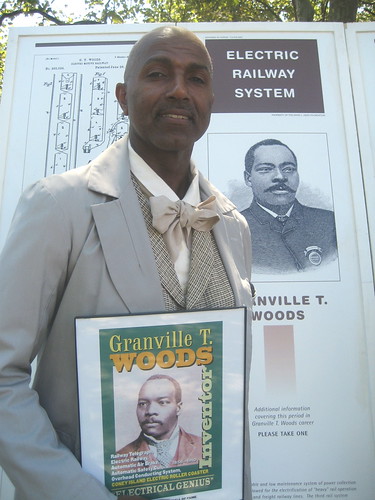 David Head will sign copies of his book on African-American inventor Granville T. Woods (1856-1910), who was inducted into the Coney Island Hall of Fame in 2008. Among Woods' patents was one for the world's first electric roller coaster, which was located in Coney Island more than a century ago. Mr. Head, a retired New York City transit worker and former chairman of the Black History Committee for TWU Local 100, was instrumental in having a Coney Island street across from Stillwell Avenue Terminal renamed "Granville T. Woods Way."

DJ Dan Kingman will play retro tunes and lead singalongs throughout the day.

Keep an eye out for our stiltwalker for free balloons and salt water taffy while supplies last.

Walk inside the iconic 1960s Astroland Rocket, which returned to Coney Island in 2014 and has a new home beside the Wonder Wheel. Adjacent to the Rocket, see a special display of historic figures and signage from the park’s classic 1955 Spook-A-Rama dark ride.

At the Coney Island History Project, share and preserve your Coney Island memories by recording an interview for our Oral History Archive. View historic artifacts, photographs, maps, ephemera and film, and the special exhibit “The 50th Anniversary of Fred Trump’s Demolition of the Steeplechase Pavilion.”

Take free souvenir photos with old-timey cutouts at Deno's Wonder Wheel Park and with the Coney Island History Project's “Skully” from Coney’s Spookhouse and an original Steeplechase horse from the legendary ride that gave Steeplechase Park its name.

Grateful for those great times

My dad and grand dad were Coney Island to me and for me. It was a most special place to spend some of my most exciting years. As a kid, it was dad's workplace, and he liked to keep us safe and sound at home. I always asked him to wake me when he got home at 3 am, at which time my mother would serve him a meal. I cherish sitting on his lap while he ate and talked about his long and I am sure grueling days at work. It molded me to be as much like the man as I could, who helped make Coney Island great

This oral history interview was recorded in 2018 by @Ms_KayJayB
3 days 17 hours ago
From @ConeyHistory's #OralHistory #Archive: Jewel Hough has worked at Deno's @WonderWheelPark for the past 20 years… https://t.co/4tgv2BWKzk
3 days 17 hours ago
NEW in the Coney Island History Project #OralHistory #Archive: Ali Lemer interviews Jim Lucarelli who recalls worki… https://t.co/YdS92QXldn
4 days 5 hours ago