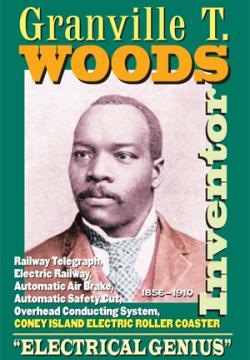 Coney Island has always had a reputation as a place where people could make their dreams come true, where people outside the mainstream could prove themselves. For inventor Granville T. Woods, it became the place where he demonstrated two of his famous inventions: an electric railway and an electric roller coaster called the Figure Eight.

Woods patented several other electrical inventions including a device called “telegraphony,” which sent telegraph and voice messages over the same wire. The Synchronous Multiplex Railway Telegraph was another of Woods’s inventions. Patented in 1885, it improved communication on the nation’s railway system by allowing telegraph messages to be sent from trains to railway stations. This innovation that helped prevent accidents by enabling dispatchers to pinpoint a train’s location.

In 1892 Woods patented a transit improvement known today as the third rail, the device that allows electricity to power trains without the use of batteries or exposed wires. He originally designed it for trains but later modified it to power an amusement ride known as the Figure Eight Roller Coaster, an invention he first demonstrated at Coney Island.

During his lifetime Woods encountered much resistance to his patents and inventions because of the prevailing belief that a black man could not have come up with creative innovations. Many rivals took advantage of this attitude, and some of his patents were stolen outright by competitors such as Thomas Edison. Woods was forced to defend himself in court and eventually won. After one of Woods’s court victories, Edison tried to hire Woods to work for him at his Edison Company.

Granville Woods was a prolific inventor who filed more than 50 patents for improved electrical devices ranging from automatic brakes, to egg incubators, to phonographs and telephones. Among the companies who bought his inventions were General Electric, Westinghouse, Edison Company, and American Engineering.  After he died in 1910, he was remembered as the “Black Thomas Edison.”

In April of 2008, the corner of Stillwell and Mermaid Avenues was named Granville T. Woods Way in his honor.

Visit our Oral History Archive to listen to an interview with David Head, who has championed the accomplishments of Granville T. Woods and has published a book and is working on a film documentary about him.