Designer and Builder of the Parachute Jump 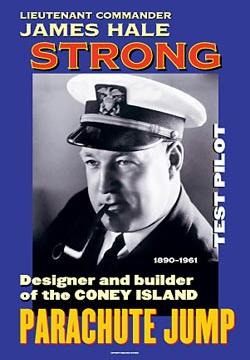 Lieutenant Commander James Hale Strong, a retired U.S. Navy officer, designed and built his first parachute jump as an apparatus that used captive parachutes to train paratroopers. Strong's steel tower was a vast improvement over the primitive wooden structures that caused injuries to trainees. The electric motor, cable system, and shock absorbers in Strong's new design kept the chutes from drifting into the tower and prevented hard landings.

When Strong built a prototype jump tower in a field in Highstown, New Jersey, in 1936, it attracted large crowds who asked to take a ride. Seeing new possibilities, he began designing a tower for civilian use.

In 1937 he reconfigured a 200-foot observation tower in Chicago to create his first recreational parachute jump. The success of this tower inspired Strong to design and patent a twelve-chute, 250-foot tower for the 1939-40 New York World's Fair.

The Tilyou family bought the tower after the fair ended and moved it to Steeplechase Park in 1941. Strong retained the rights and continued to maintain the structure and provide all replacement parts during its twenty-three-year run at Steeplechase. The Parachute Jump had a perfect safety record despite the stiff ocean breezes, which sometimes forced its closure.

The jump ceased operation in 1964 and was abandoned when Steeplechase was demolished in 1966. The rusting structure eventually gained landmark status in 1988. It was dismantled, repaired, and reassembled in 2002.

Strong's Safe Parachute Jump Company also manufactured another of his inventions: a paper parachute used by the U.S. Weather Service to safely retrieve information gathered by weather balloons. Strong's Parachute Jump represents one of best examples of "swords to plowshares."