Inventor of the Hot Dog 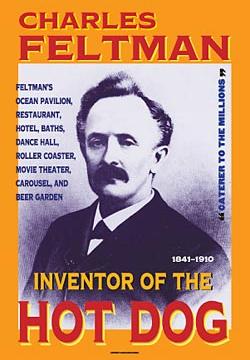 Charles Feltman began his career in 1867 pushing a pie wagon through the sand dunes of Coney Island. Four years later he leased a small plot of land and began building an empire that by the early 1900s covered a full city block and consisted of nine restaurants, a roller coaster, a carousel, a ballroom, an outdoor movie theater, a hotel, a beer garden, a bathhouse, a pavilion, a Tyrolean village, two enormous bars, and a maple garden. By the 1920s Feltman's Ocean Pavilion was serving five million customers a year and was billed as the world's largest restaurant.

Feltman, a German immigrant who arrived in New York in 1856 at the age of fifteen, is generally credited with inventing the hot dog on a bun. According to legend, he came up with the idea of putting a sausage on a roll so he could avoid providing silverware and plates to customers. The restaurant sold millions of ten-cent hot dogs a year but was better known for its shore dinner, a seafood plate including lobster, fish and oysters.

In 1916 a Feltman employee named Nathan Handwerker left to start his own business a few blocks away on Surf Avenue. Handwerker's Nathan's Famous soon eclipsed his former employer's restaurant and became a Coney Island icon. Charles Feltman's family ran the business after Charles died in 1910 and sold the property in the 1940s. Dewey Albert and his son Jerry Albert bought the property in 1962 and gradually transformed it into Astroland Park. One of Feltman's kitchens, with its chimneys and tile floor, remains and was used as an Astroland workshop until the park closed in 2008 and was demolished in 2010.