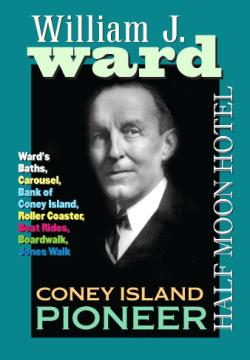 William Ward’s father, John Ward, came to Coney Island in the early 1870s and opened a small bathhouse on the beach. By the time the first land divisions were sold off a decade later, the Wards owned a full block between Jones Walk and West 12th Street. Young William Ward took over and soon expanded the family’s beachfront empire to include a dance hall, a restaurant pavilion, and Coney Island’s first boardwalk.

William believed in the future of Coney Island and was a driving force for development of a year-round resort after Coney’s racetracks and grand hotels closed early in the 20th century. He was a founder of the Coney Island Chamber of Commerce in 1924, and a year later established the Bank of Coney Island where he served as president. The chamber invested in Coney’s future, and Ward built many substantial landmark structures, including the impressive bank building that stood abandoned on West 12th Street and Surf Avenue until it was demolished by a real estate developer in 2010.

Perhaps his greatest achievment was putting together the conglomerate that erected the Half Moon Hotel at Coney’s West End.

The Wards formed partnerships and provided financing for many attractions on the family’s Jones Walk property, among them the Jackman’s Thriller Roller Coaster, Wonder Wheel, Tunnels of Love, Virginia Reel, Koster’s Hotel, Skooter Boats, and dozens of small concessions.

William Ward was so highly regarded by the community that the Brooklyn Democratic Party considered drafting him as a candidate for mayor in the 1920s. Ward was not an absentee landlord. He had a summer home above his Boardwalk Bathhouse on West 12th Street, and it was there that he died in 1937.

The Ward family continued investing in Coney Island and operated Ward’s Kiddie Park for a generation before leasing it to the Vourderis family in the 1980s. Jones Walk and the Wonder Wheel Boardwalk kiddie park property were still owned by the Wards until 2008, when they sold the parcels to the City.