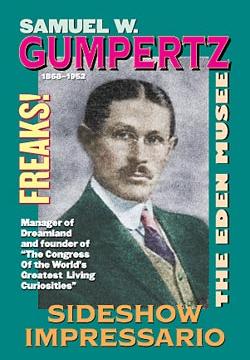 Samuel Gumpertz, the master showman who began his career as an acrobat at the age of nine, wore many hats during his three decades in Coney Island. He ran numerous sideshows, managed the magnificent Dreamland Park, operated Parkway Baths, Coney's largest bathhouse, owned the bizarre Eden Musee Wax Museum and Chamber of Horrors, and ended his career in Coney with the Dreamland Circus Sideshow.

Gumpertz was famous for bringing unusual performers to his "Congress of Curious People and Living Curiosities," which opened on Surf Avenue in 1911 and ran for three decades. Among the acts were two-foot tall Baron Paucci, the world's "smallest perfect man"; Zip the "What Is It?"; and Lionel, the Dog-Faced Boy.

Reformers criticized Gumpertz's sideshows as exploitative, but the truth was that his performers made a good living which otherwise would have been impossible at the time.

His lavish live shows also included anthropological curiosities such as a band of Philippine Bantoc tribesmen, the Wild Man of Borneo, and Ubangi "Platter-Lipped" women. Perhaps his greatest attraction was the half-scale Lilliputian Village at Dreamland populated by hundreds of midgets who lived happily in their own tiny community.

Gumpertz managed Dreamland Park until it was destroyed by fire in 1911. A tireless Coney Island promoter, Gumpertz helped organize the annual Mardi Gras parade and served as president of the Coney Island Chamber of Commerce. He was finally lured out of Coney Island in 1929 to become manager of the Ringling Brothers and Barnum & Bailey Circus.