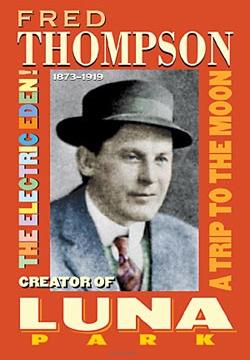 Fred Thompson and his business partner, Skip Dundy, unveiled their greatest creation on the night of May 16, 1903. Luna Park, a fantasyland of exotic towers, minarets, and domes, strung with half a million electric lights, opened for business to an enthralled crowd who had never experienced anything like it.

Thompson began his career as an architectural draftsman and gained amusement experience at the great fairs of the late nineteenth century. Thompson and Dundy became known at the 1900 Buffalo Pan-American Exposition for their attractions including an illusion show called A Trip to the Moon. The show simulated a moon landing complete with imitation green cheese and midget moon men.

When the fair closed, they moved the show and several other attractions to George C. Tilyou's Steeplechase Park in Coney Island. The partners soon had a falling out with Tilyou and relocated their moon ride to the Sea Lion Park site several blocks away. They leased the park from Paul Boyton and used its Shoot-the-Chutes lagoon as a centerpiece for Luna Park, named for Dundy's sister, Luna. The park, an instant success, featured the Electric Tower, the Dragon's Gorge, a wild animal show and circus, a helter-skelter slide, the Old Mill, and hundreds of other rides and attractions. Elephants and camels strolled the grounds.

But it was the park's fantasy architecture that was the main draw. Thompson boasted how he "eliminated all classic conventional forms" and for his model drew on "a sort of free Renaissance and Oriental type."

Luna Park remained popular, but Thompson's personal problems drove it into bankruptcy in 1911. After he died in 1919, the park went through a series of owners and fires until it finally closed in 1946.