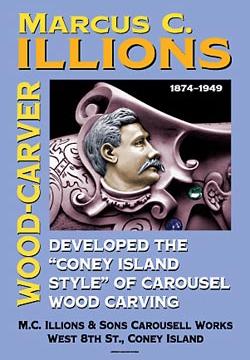 Marcus Charles Illions, considered the world's greatest carousel carver, was born in Russia where he began an apprenticeship building circus wagons. He traveled to the United States in 1888 with lion-tamer Frank Bostock, "The Animal King," whose wild animal show would become part of Dreamland Park. Illions perfected his skills in the 1890s by carving horses for Charles Looff, and later for William Mangels.

In 1909 he founded M. C. Illions and Sons Carousell Works, on West Eighth Street in Coney Island, and began developing the "Coney Island style" of carousel horse carvings, described by historian Roland Summit as having "explosive, flying manes and powerful straining bodies, decked out with latticework harnesses and other virtuoso feats of carving." Also known for his elaborate decorative work, Illions carved ornate organ fronts and whimsical ticket booths such as the chariot booths used at the early Luna Park.

All of Coney Island served as a showroom for the Illions company, with ten of his of his shop's carousels operating from Brighton Beach Park to West Twenty-seventh Street. The Feltmans carousel was probably the finest that the master carver ever created. It remained in Coney Island until it was sold in 1964.

When carousel orders dried up during the Great Depression, Illions fell on hard times and was reduced to doing repair work. He died broke in 1949.