Inventor of the Baby Incubator 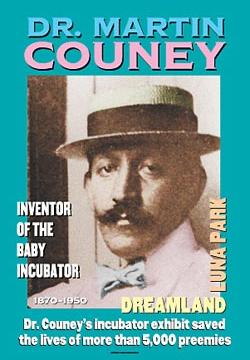 Dr. Martin Arthur Couney saved the lives of thousands of premature infants at his Coney Island baby incubator exhibit. It is hard to believe that incubators were not used or accepted by the medical establishment until the 1930s. Couney was forced to make his clinic into a sideshow exhibit. Although the exhibit was located in an amusement park, the atmosphere inside was solemn and professional. Couney never charged parents a fee for the care he gave their infants. His clinic was financed strictly through entrance fees.

Couney received his medical degree in Germany and studied with Dr. Pierre Budin, who had pioneered the theory of incubators. Couney had two exhibits in Coney Island, one in Luna Park from 1903 until 1943, and another in Dreamland from 1904 until the fire of 1911. His medical consisted of five wet-nurses and fifteen highly trained medical technicians including his daughter Hildegarde, a nurse. By 1939, he had treated more than 8,000 babies and saved the lives of 6,500. One of them was his daughter, who had weighed less than three pounds at birth.

Couney operated under constant criticism and numerous attempts to shut down his exhibit, which many considered to be "against maternal nature." But Couney persisted and provided medical care for the children of parents otherwise unable to afford it. By the time his Luna Park exhibit closed in 1943, Couney's methods were being used in mainstream hospitals. Couney retired and died alone at his home in Sea Gate in 1950.

Visit our Oral History Archive to listen to interviews recorded in 2007 with Beth Allen, a former incubator baby whom Dr. Couney saved in 1941, and her cousin Terry Silverman, who visited her in Dr. Couney's sideshow in Luna Park.