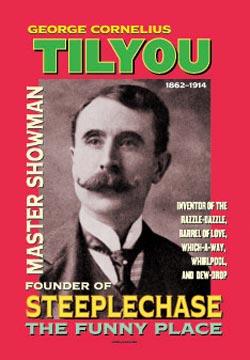 Steeplechase Park founder George C. Tilyou was a master showman and amateur psychologist who understood how people wanted to be entertained. He realized that his customers were happy to play the fool to entertain others.

Tilyou came with his parents to Coney Island in 1865 at the tender age of three. His father, Peter, opened a small wooden bathhouse and restaurant on the beach, and young George was soon selling bottles of souvenir sand to visitors. The family nearly lost everything when they challenged Coney's political boss, John McKane, in the 1880s. After McKane went to prison, the Tilyous' fortunes improved, and soon George owned a theater, a Ferris wheel, and other rides scattered along the beach.

Tilyou became Coney's biggest booster and a philanthropist who supported local orphanages, the Catholic church, children's hospitals, and other charities.

In 1897 George Tilyou moved his rides into an enclosed park at West Sixteenth Street and Surf Avenue. Horse racing was the park's theme. The Steeplechase ride enabled ordinary people to experience the thrill of racing by riding mechanical horses along a steel track. Tilyou charged an admission fee to enter Steeplechase, enabling him to keep Coney's rougher element out of his family-oriented park.

When half the park was destroyed by fire in 1907, Tilyou built an enclosed glass and steel structure called the Pavilion of Fun that provided shelter in inclement weather. After his death in 1914, his children operated the park. In 1964 they sold it to a developer who demolished it.