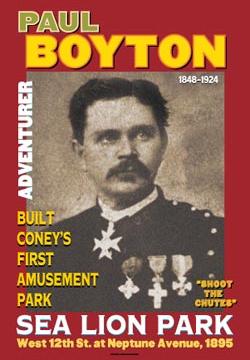 What better place than Coney Island for a man who paddled down the world's great rivers in a rubber suit and was the first to swim the English Channel? Paul Boyton built Coney Island's first enclosed amusement park in 1895. Sea Lion Park, erected on what would later become Luna Park, was a small collection of rides featuring the Shoot-the-Chutes water ride and the Flip-Flap looping coaster. Live sea lions also entertained visitors.

Boyton was an adventurer and acrobat who joined the Union Navy at age fifteen and fought in the Civil War. After the war, he became captain of the first life saving service, in Atlantic City.

During the 1880s, Boyton became famous around the world for his long-distance swimming feats accomplished while wearing a rubber survival suit.

In 1894 he settled in Coney Island and on July 4, 1895, opened his aquatic-themed park, which paved the way for Luna Park, Steeplechase, and Dreamland. Sea Lion Park was short-lived and closed during the disastrous rainy season of 1902. The Shoot-the-Chutes ride was incorporated into Luna Park and operated until 1944. Boyton died at his home in Sheepshead Bay in 1924.

Visit our Oral History Archive to listen to an interview with Craig Boyton Dudley, great-grandson of Paul Boyton.