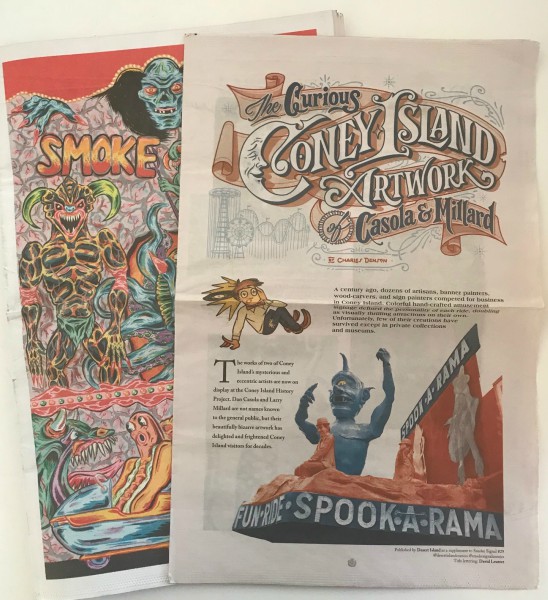 Charles Denson's essay "The Curious Coney Island Artwork of Casola and Millard," excerpted below, appears in the new issue of Smoke Signal, with lettering by David Leutert, published by Desert Island Comics. The Coney Island themed-magazine is available free in their store, at 540 Metropolitan Avenue in Brooklyn, or via mail order. The Coney Island History Project will be distributing free copies at our exhibit center this summer.

A century ago, dozens of artisans, banner painters, wood-carvers, and sign painters competed for business in Coney Island. Unfortunately, few of their creations have survived except in private collections and museums.

The works of two of Coney Island's mysterious and eccentric artists are now on display at the Coney Island History Project. Dan Casola and Larry Millard are not names known to the general public, but their beautifully bizarre artwork has delighted and frightened Coney Island visitors for decades.

Dan Casola's sideshow banners command astronomical prices from collectors if you can find one. Less known are Casola's sculptural works and painted signs. Casola created the iconic Spook-A-Rama Cyclops from Denos Wonder Wheel Park, a work of art that recently toured the country as part of a traveling Coney Island art exhibit that ended at the Brooklyn Museum. For three decades the horned monster, with its rotating glowing eye, stood guard over Coney Island's Bowery.

Italian immigrant Dan Casola was a self-taught artist with a twisted sense of humor. His stylized billboards, signage, wax figures, fire-breathing dragons, and animated mechanical figures were fixtures across Coney Island. He worked out of storefront studios on Surf Avenue and later from his home on Stillwell Avenue. His largest canvas was the Spook-A-Rama dark ride. During the 1950s, at the height of the monster movie craze, he covered the ride's block-long facade with dozens of humorous hand-painted signs and animated figures including the iconic Cyclops.

Casola had an eye for the ladies and ran several burlesque "Girlie Shows" on the Bowery during the 1940s. His daughter, Patricia, recalls his artwork being heavy on the "boobs and butts." She also remembers growing up in a house full of "glass eyeballs, plaster heads, and boxes of hair" that he used for his animated creations. Her mother's lingerie would disappear and later turn up on spook house figures. "He had this very interesting side to him," she says. Indeed.

The mural-covered interior of the Playland Arcade on Surf Avenue delighted patrons for many decades, yet few knew the story behind the whimsical artwork covering every inch of the establishment. Playland closed in 1983, and the building stood empty until it was demolished in 2013. Fifteen years ago the Coney Island History Project began an ambitious project to document and preserve the rapidly deteriorating cartoon murals and to tell the story of the artist who created them. It became an uphill battle against vandals, thieves, and Hurricane Sandy, but finally the story can be told.

In the winter of 1957 a mysterious artist named Larry Millard showed up at the Playland Arcade looking for work. The 45-year-old Millard claimed to have been a cartoonist for the New York Daily News and offered his services as a sign painter. Playland owner Alex Elowitz hired him to paint several Skeeball signs. His lettering was stylish and perfect, and he soon expanded his work to include cartoon characters and humorous narratives. Millard worked tirelessly through the summer of 1958, painting larger and more colorful murals on every inch of wall space.

Millard was a heavy drinker who followed a daily routine. He arrived early in the morning unshaven and smelling of alcohol, suffering from the shakes. After he purchased a bottle of Thunderbird wine at the liquor store next to Mama Kirsch's restaurant, his hands would become steady enough to draw.

Stanley Fox, whose brother Alex owned the arcade, described Millard as “artsy looking,” with dark hair and a mustache, always wearing a fedora and usually accompanied by his girlfriend, an African-American woman named Eunice. Millard would arrive daily with sketches to be approved by Elowitz. “My brother paid him by the day, maybe $25. Larry lived somewhere in Coney Island, although no one was sure where.”

Millard’s later work consisted of complex cartoons illustrated with puns and jokes: busty, leggy women with hapless boyfriends. Many of his murals were in the cartoon style of Lil’ Abner creator Al Capp. The public loved his work, and he continued painting Playland until every wall was filled. After finishing up at Playland, he began painting outdoor signs around Coney Island and more murals at Stauch’s Baths and the B&B Carousel.

Millard disappeared from Coney Island in 1960 and was never seen again. He left his mark on Coney Island, works that served as petroglyphs: deceivingly simple yet undecipherable and opaque. Beneath the inherent humor in his pieces, it’s possible that most of his sketches were actually self-portraits telling his life story: the tale of a tortured soul, a gambler who had bad luck with women. --Charles Denson

NEW in our #OralHistory #Archive: It's rare to record interviews with two generations! Frieda Schwelke, 92, grew up… https://t.co/lEAR72WpTL
14 hours 47 min ago

RT @CMAriKagan47: Today, @CMShekarK and I held a @nyccouncil public hearing on the status of our coastal parks & beaches, especially the Bo…
2 days 13 hours ago