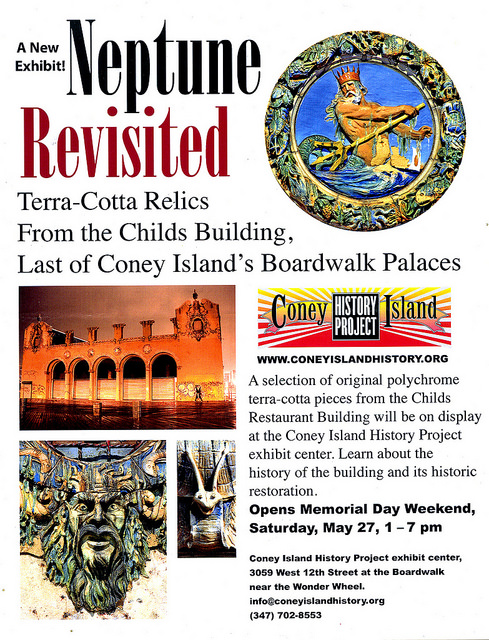 The Coney Island History Project's special exhibition for the 2017 season, opening on Memorial Day Weekend, is "Neptune Revisited: Terra Cotta Relics from the Childs Building, Last of Coney Island's Boardwalk Palaces." A selection of original polychrome pieces from the Childs Restaurant Building will be on display along with archival photographs, ephemera, and an illustrated timeline of the history of the building and its restoration.

Childs Restaurant Building on the Coney Island Boardwalk has a remarkable history that spans nearly a century. Completed in 1924, and originally the flagship location for the Childs Restaurant chain, the building has served as a candy factory, a book warehouse, and a roller rink. The fireproof building also acted as a firebreak during the disastrous fire of 1932, stopping the flames and saving the amusement area from destruction. Childs survived years of isolation at the westernmost fringe of Coney Island's amusement zone as everything else around it closed down and was demolished.

The landmark building's colorful, nautical-themed terra-cotta façade, marble columns, and multi-arched entranceway, have charmed and mystified Boardwalk visitors for nearly a century. One of the most striking images on the building is a medallion of King Neptune with gold crown and trident, rising from the sea, dripping with seaweed, and gazing out as if serving as guardian of the Boardwalk. The Childs Building, now connected to the adjacent Ford Amphitheater, recently underwent a magnificent, multi-million dollar restoration and has once again reopened as a restaurant. Last May, prior to the opening of the Amphitheater, Coney Island History Project director Charles Denson made a short film about the building's history and future, which may be viewed here.

The building's restoration included replication and replacement of the beautiful but seriously damaged terra-cotta decorations that covered the facade. Hundreds of replications were lovingly hand-painted and hand finished by the Boston Valley Terra-Cotta Company in Buffalo, New York. Visitors to the Coney Island History Project can now get an up-close view of many of the original polychrome terra-cotta pieces that were removed, including the King Neptune medallion and a medallion showing an image of the Boardwalk and building that was hidden away for decades on an interior wall of the restaurant. 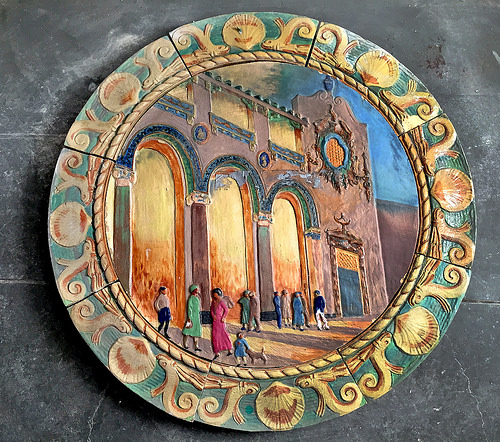 Original Terra cotta medallion showing an image of the Childs Building from an interior wall of the restaurant is on view in the Coney Island History Project exhibit. The medallion is 48 inches in diameter. Photo by Charles Denson

The Coney Island History Project exhibition center is open free of charge on Saturdays, Sundays and holidays from Memorial Day Weekend through Labor Day. We're located on West 12th Street at the entrance to Deno's Wonder Wheel Park, just a few steps off the Boardwalk.

View historic artifacts, photographs, maps, ephemera and films of Coney Island's colorful past. Visitors are invited to take free souvenir photos with the iconic Spook-A-Rama Cyclops and Coney Island's only original Steeplechase horse, from the legendary ride that gave Steeplechase Park its name. Among the rare treasures on display is Coney Island's oldest surviving artifact from the dawn of the "World's Playground." The 1823 Toll House sign dates back to the days when the toll for a horse and rider to "the Island" was 5 cents!

Every summer i travel from the Bronx to Coney island just to marvel at the Nautical theme medallions of Childs building. I grew up on the beaches of Dominican Republic, and i would like to think that i am a water man. Growing up in exotic beaches and knowing marine creatures since very young, the Childs' Medallions have a hypnotic effect on me: they transport me to my childhood: going to the beach with my mom, aunt and cousins. I stay for hours at end just gazing at these medallions. It made my heart g;lad to know that they'll be in exhibition at the Coney Island History project, beautiful. Thank you much and stay nautical.

I'm from Coney Island myself...I remember marveling at the medallions on this building as a kid....I do recall the "King Neptune" one...This building was usually looking vacant/dilapidated but I'm pretty sure it was used as a flea market for a brief time in the mid 70s...Anyone else here recall that?

Greek music and dance presented by the Coney Island History Project in honor of Denos and Lula Vourderis, the found… https://t.co/AtQ8fFY7f2
16 hours 26 min ago