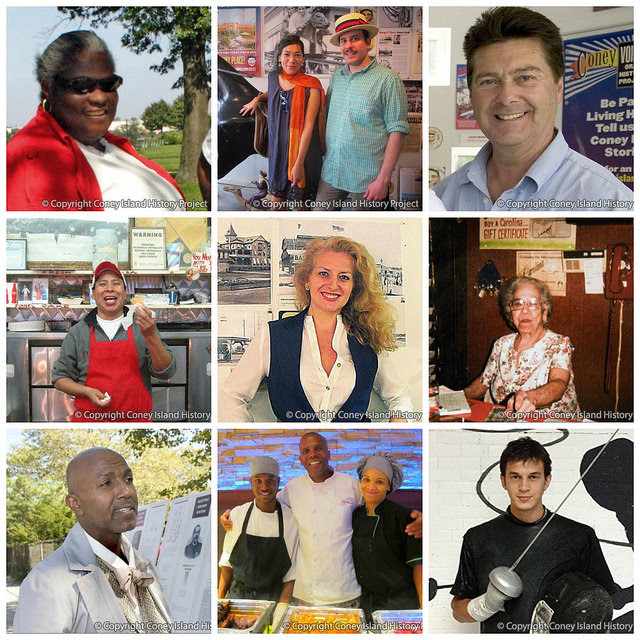 Among the recent additions to the Coney Island History Project's online Oral History Archive are the following interviews. Please listen, share, and if you or someone you know would like to record a story, either in person or on the phone, sign up here.

What better place than Coney Island for a man who floated down the Amazon River in a rubber suit and was the first to swim the English Channel. Craig Boyton Dudley talks about his great-grandfather, Paul Boyton, who built Sea Lion Park, Coney Island's first enclosed amusement park, in 1895. Boyton's Shoot the Chutes was incorporated into Luna Park and operated until 1944.

Economic development specialist Georganna Deas is a Coney Island resident and advocate who has lived in the Gravesend Houses on Kaiser Park for 40 years. Among the issues she talks about was getting rid of the smokestacks along Coney Island Creek, challenging the Transit Authority to make Coney Island a one-fare zone, and organizing against the privatization of Coney Island Hospital.

Louise Milano shares memories of her mother, Carolina, who operated Carolina Restaurant on Mermaid Avenue for 60 years, and of growing up in a restaurant family. Carrie prepared traditional home style cooking such as breaded baked clams, fried zucchini flowers, and stuffed artichokes with garlic that remains memorable to generations of Coney Island residents.

Taty Alicea and her son Ralph Alicea share fond memories of Coney Island's famous Laughing Lady, a popular mechanical attraction that was part of the Magic Carpet Fun House and is greatly missed.

Federico Ausbury and Maira Vergara are a husband-and-wife music duo whose band is called A Flying Dodo Society. Last summer, they busked on the Q train and in Coney Island on the boardwalk and the pier. They talk about their journey from Argentina, where Maira is from and they first met, and Puerto Rico, where Federico grew up, to Brooklyn and Coney Island. Ausbury sings one of his new songs, "Coney Island (Shake Your Shoes)," accompanying himself on kalimba.

Marina Rubin, the author of Stealing Cherries (2013), reads excerpts from her book of flash fiction, and talks about storytelling, poetry and the Russian Jewish immigrant experience. Born in the small town of Vinnitsa, Ukraine, she immigrated to the U.S. with her family, who sought political asylum and settled first in Bensonhurst and then in Coney Island.

David Head is a retired NYC Transit worker and former chairman of the Black History Committee for TWU Local 100. He talks about the accomplishments of Granville T. Woods (1856-1910), an African-American inventor whom he has championed. Among Woods' many electrical patents was one for the world's first electric roller coaster, which was located in Coney Island a century ago. Head was instrumental in having a Coney Island street across from Stillwell Terminal renamed Granville T. Woods Way and wrote a book about Woods' career.

Gabriel Valencia lives in Coney Island and has worked at Gregory & Paul's eatery, now called Paul's Daughter, for 20 years. He came to New York from Mexico to join his brother and learned English little by little, by talking with the customers at the counter. Paul Georgoulakos and his family are good people who treat him "like family," says Valencia. He tends the bar at the popular restaurant, which was founded at this location in 1962 and is the oldest on the Boardwalk.

Basil Jones is the chef at Footprints Cafe in Coney Island, which specializes in Caribbean cuisine, and is the originator of their famed Rasta Pasta. Born in Jamaica, Jones learned to cook as a boy helping out in his grandmother's kitchen. He talks about his culinary career, from his first job at a hotel restaurant to creating unique dishes for Jamaica's 25th anniversary. A scholarship to culinary school brought Jones to the U.S, where he settled in Brooklyn and developed the original menu for Footprints.

Misha Mokretsov, head coach and owner of the New York Fencing Academy in Coney Island, has trained nationally top-ranked fencers in every age group. He says that fencing is an intellectual as well as a physical sport, making it a popular choice of parents and one of the fastest growing sports in the U.S. Among his fencing academy's first students were the children of Russian and Ukrainian immigrants who had fenced in their youth. When weather permits, the students do physical conditioning on Coney Island's beach.

RT @MarkTreyger718: School leaders, particularly high schools are facing severe staff shortages in content areas that are hard to fill. Not…
10 hours 7 min ago
Last year Katya Kumkova recorded Frank Gurrera's story, which is excerpted in the segment, for our oral history pro… https://t.co/ptXgyZurPJ
12 hours 29 min ago
Thank you to @ABC7NY's @JoshEiniger7 for this moving tribute to @TWULocal100's Frank Gurrera, 95, who passed away a… https://t.co/7WTY2KGmkY
12 hours 36 min ago