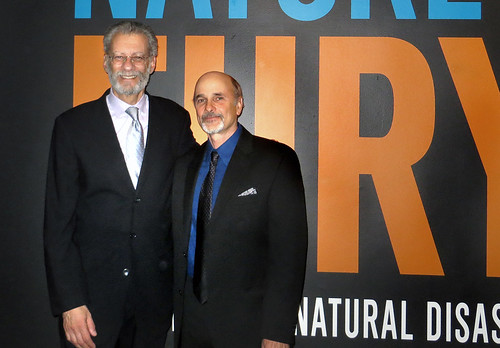 Charles Denson and David Harvey, Senior VP of Exhibitions, American Museum of Natural History, at the November 10 exhibition preview and reception of "Nature's Fury: The Science of Natural Disasters"

I was extremely honored to participate in the Nature's Fury exhibition at the American Museum of Natural History. During the last two years I've been approached by numerous media outlets that wanted to license my footage of Hurricane Sandy and have turned them all down. I feel that this dynamic and informative exhibit is the right venue and was honored to be asked to contribute my documentation of the storm. This exhibition is a wake-up call for anyone living in New York City's flood zones, especially Coney Island. 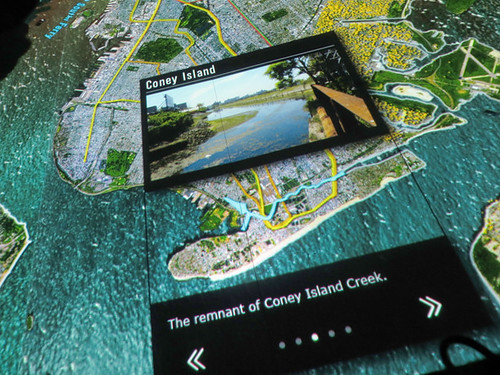 A close up of Coney Island Creek on the interactive map at "Nature's Fury: The Science of Natural Disasters" at the American Museum of Natural History. The creek is the subject of Charles Denson’s forthcoming documentary about the historic waterway. Photo © Charles Denson

NATURE’S FURY: THE SCIENCE OF NATURAL DISASTERS, November 15, 2014 - August 9, 2015 From earthquakes and volcanoes to hurricanes and tornadoes, nature’s forces shape our dynamic planet and often endanger people around the world. Nature’s Fury will uncover the causes of these natural disasters, explore the risks associated with each, and examine how people cope and adapt in their aftermath. Interactive displays and animations will help visitors understand how natural phenomena work. By monitoring earthquakes around the world in real time, manipulating a model earthquake fault, generating a virtual volcano, standing within the center of a roaring tornado, and watching the power of Hurricane Sandy via an interactive map of New York City, visitors will learn how scientists are helping to make better predictions, plan responses, and prepare for future events. 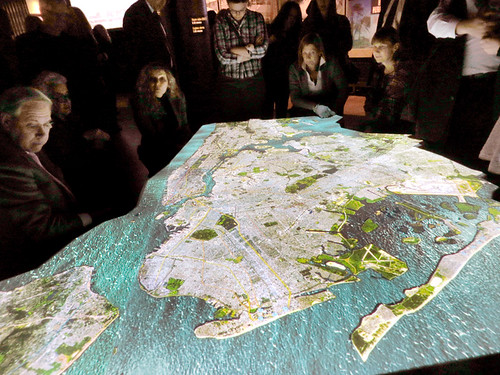 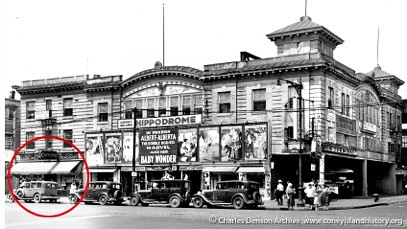 Grimaldi’s at 1215 Surf Avenue, with its sleek glass facade and bold picturesque signage, appears to be modern, but the building has a fascinating history that represents the century-long transformation of the street’s north side. The structure is a small remnant of the 1907 Lido Hotel on West 12th Street (first known as the Boston Hotel and later as the Coney Island Hippodrome). The original tenant was a cafeteria, the first of several restaurants that would operate at that location. 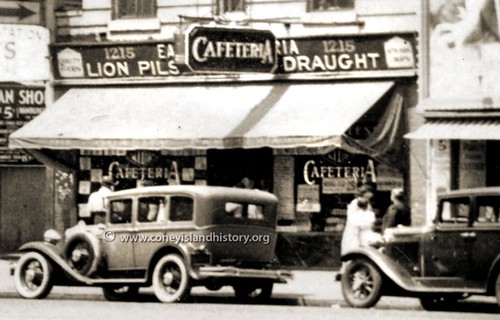 During the 1940s, the building was reduced to one story and transformed into a penny arcade that operated until the 1970s. Surf Avenue’s north side between West 12th and Stillwell Avenue once boasted dozens of attractions including the Crazy Ghosts dark ride, a McCullough carousel, a billiard parlor, the Hollywood Bar, a bowling alley, the Mardi Gras Movie Theater, and the Lido's Theater, home to 1940s sideshows and the Bread and Puppet theater troupe during the late 1960s. 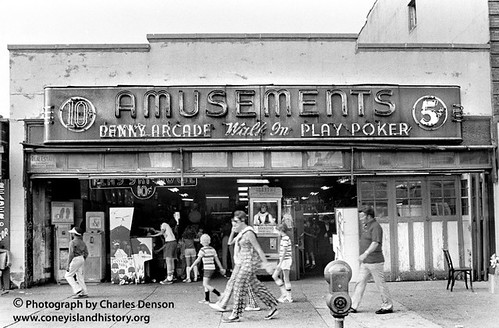 All were gone by the mid-1970s. The building at 1215 Surf, like many others on the avenue’s north side, became a cut-rate furniture store, a business not permitted under amusement zoning. The adjacent Lido Hotel was destroyed by fire in the early 1980s but the one-story section now housing Grimaldi’s survived. The vacant Lido site became a flea market, replaced in 2002 with the three-story building currently on the site. 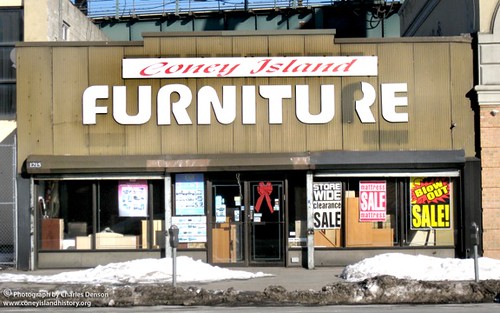 A 21st-century resurrection of the block includes the restored Stillwell Avenue Terminal, Applebee's, a proposed Johnny Rockets, two bars, a strip club, and the offices of Community Board 13 and the Alliance for Coney Island.

At the center of it all is Grimaldi’s Brick Oven Pizzeria, located in a structure whose interior of exposed brick walls are the only clue to the building’s historic past. 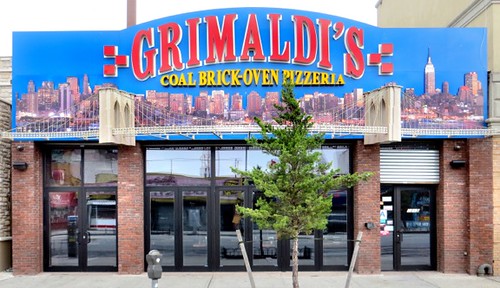 Coney Island fell victim to devastating urban renewal projects in the 1950s and 1960s. More than a thousand viable apartment buildings, homes, and businesses were condemned and demolished by the city during this terrible period. A few buildings were fortunate to escape the urban renewal onslaught. Some can be found in the West End, and a few are located in the amusement zone.

Most of the surviving structures in the amusement area are hidden behind altered facades, having been repurposed dozens of times during the last century. The fascinating histories of these structures are not known to the public or even to the buildings’ owners. I’ve created this survey of these buildings to show how the structures were transformed through the decades. This will be the first in a series.

The Capitol Hotel and Korbel Bakery, West 15th Street and Surf Avenue circa 1899

We begin with two buildings located at Surf Avenue on West 15th Street. The three-story frame building on the corner, erected in the 1890s, was once the Capitol Hotel. Hand-lettered signs in the oldest photo point to the hotel’s horse stables on West 15th Street and list the hotel restaurant’s specialties: “Clams, Oysters, Chops and Roast Game.” Next to the signs is an advertisement for Steeplechase Park. The smaller two-story building to the right is Korbel’s Bakery. The bakery building was later raised and a third story added.

The Capitol and bakery buildings in 1921

In the 1920s photo, the Capitol has changed its name to Villa Penza, and the bakery has become the Parkway Bakery and Restaurant. Over the years the Capitol building has been occupied by a variety of tenants including the Draft Board and the Coney Island Chamber of Commerce. During the last two decades, the corner was home to an old-style Coney Island “social club” that recently relocated up the block to make way for Rita’s Italian Ices, a new business that opened in April 2014. Both buildings have undergone enormous changes during the last century, losing their covered wooden porches, shutters, and clapboard and shingle exteriors. Luckily, the buildings are viable and can still be identified by their existing rooftop cornices.

The Capitol Hotel and Korbel Bakery circa 1899 (left). The Capitol building in 2003 (right)

posted May 2nd, 2014 in By Charles Denson and tagged with adaptive reuse, architecture, Capitol Hotel,...
5 commentsPermalink

There was much to be thankful for in Coney Island during 2013: The B&B Carousell returned, Steeplechase Plaza opened, the storm-damaged pier was rebuilt, and the Parachute Jump was given a new lighting scheme. But the year also saw the demise of several historic structures. The Astrotower demolition received the most publicity as the tower was cut to pieces amid a cloud of mass hysteria. Nearly the entire amusement zone was closed down on the Fourth of July as the swaying tower met its demise. The demolition was unnecessary and left a huge hole in Coney’s skyline. The other structures we lost received little attention. West Eighth Street bore the brunt of the demolition. Until the 1960s West Eighth was a center of an amusement manufacturing, and until recently you could still see remnants of its industrial past. Now those remnants are being slowly erased.

First to disappear were the beautiful mosaic murals on the façade of the old Bonomo candy factory at the Neptune Avenue end of the street. The colorful triptych dated to the 1940s, and each stylized panel illustrated the story of candy manufacturing: raw materials, processing, and delicious finished products. When scaffolding went up around the building, I asked the workers what was happening. They claimed they were “cleaning the front.” A week later, the enormous murals were gone. The murals were located next door to the old William F. Mangels amusement factory, which now houses the Department of Motor Vehicles. We had tried for years without success to document the history of the murals, but the building’s owners were not helpful, and the artist was never identified.

The KeySpan Building
Farther up the block, on Coney Island Creek, the sprawling brick headquarters of the old Brooklyn Union Gas Company was unceremoniously reduced to rubble this past fall as the site was cleared for a public storage facility. The 85-year-old Tudor revival building was an architectural gem, and there was nothing else like it in Coney Island. We will miss the decorative Flemish brickwork, copper-lined gable dormers, multicolored slate roof, buttresses, huge bay windows, tall chimneys, and massive wood front doors. The building’s fixtures and decorative elements were scavenged and carted off to a Manhattan antique store.

At the Surf Avenue end of West Eighth Street, the half-century-old steel arch pedestrian overpass known as the “Shark Bridge” was demolished after years of civic neglect. The bridge, spanning Surf Avenue, was built in 1956 to connect the West Eighth Street elevated station to the Aquarium and Boardwalk. Beach-goers, especially the elderly and families with children, used it to avoid the dangerous traffic on Surf Avenue. The bridge was controversial when Robert Moses erected it as an entrance to the Aquarium because some felt that its purpose was to bypass Coney’s attractions. There are no plans to replace the bridge, and visitors will now have to fight traffic to get to the beach.

Last fall, the 19th-century building on Mermaid Avenue that once housed Carolina Restaurant was bulldozed, to be replaced an apartment house. The Carolina closed a decade ago, and the building recently housed a Chinese restaurant that never reopened after suffering damage from Hurricane Sandy. The surrounding area was once the center of an Italian-American community that boasted numerous Italian restaurants. Gargiulo's is the last one standing. Coincidentally, an old billboard advertising the Carolina, located behind a gas station on Neptune Avenue and West 17th Street, was removed earlier in the year, also to make way for an apartment building.
posted Feb 14th, 2014 in By Charles Denson and tagged with
16 commentsPermalink